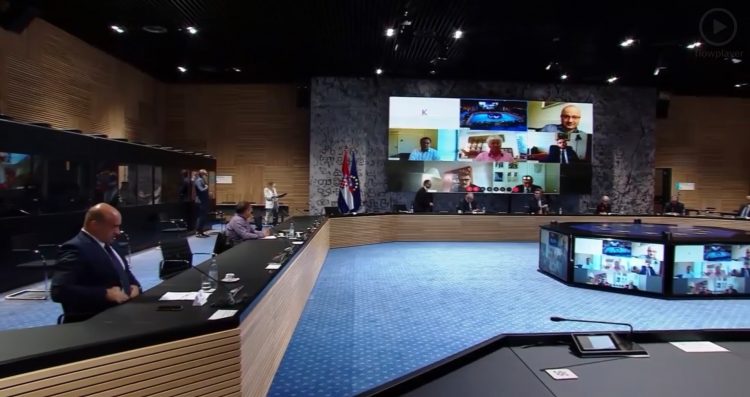 Health Minister Vili Beros said on Thursday the government's Scientific Council agreed with the introduction of new COVID-19 measures but would not say if travel passes would be one of them, although they were discussed at today's meeting.

Speaking to the press after the meeting, at which the new measures were presented to the Council, Beros said they were all agreed that the measures were necessary ahead of the coming holidays as well as that the “winter COVID wave is far more challenging both scientifically and clinically.”

Asked if passes for travelling within the country were discussed, he said they were but would not say if they would be introduced because the new measures will be presented tomorrow.

He said that “if they are introduced, they will be on the county, not the municipal level,” adding that bars and restaurants would stay closed.

Asked if private socialising would be restricted to two households, Beros said the goal was to prevent unnecessary socialising. “As all European countries, we too will consider it. We will call for that. However, no one will certainly enter homes to check.”

“We will do everything for the initial vaccine doses to arrive in Croatia. However, vaccination will be a long process lasting more than six months,” he said, adding that Croatia had a “comparatively enormous advantage” as an EU member state.

The minister said that at the moment it was impossible to foresee the vaccination pace, adding that he would consider general practitioners’ suggestion to create a vaccination registration platform.

He went on to say that the meeting also discussed the effects of the restrictions in surrounding countries, the conclusion being that tougher restrictions were not necessarily more effective, “not just economically, on which there is no dilemma, but health-wise too.” He said it was too early to draw concrete conclusions.

Researcher: 60%-75% of population must get vaccinated to curb epidemic

Scientific Council member Dragan Primorac said the meeting also discussed how to communicate with citizens about the need to get vaccinated.

“The right communication… is the only way we can convince people in countries where vaccination won’t be mandatory… that it is a matter of everyone’s responsibility,” he said, adding that it concerned the protection of the entire population.

Primorac said 60% to 75% of the population must get vaccinated in order to curb the epidemic.

Asked if it was certain that Croatia would procure enough doses, he said the procurement of the COVID vaccine was a test of the EU’s credibility because all member states were equal.