Central bank governor: Euro adoption will be beneficial for Croatia 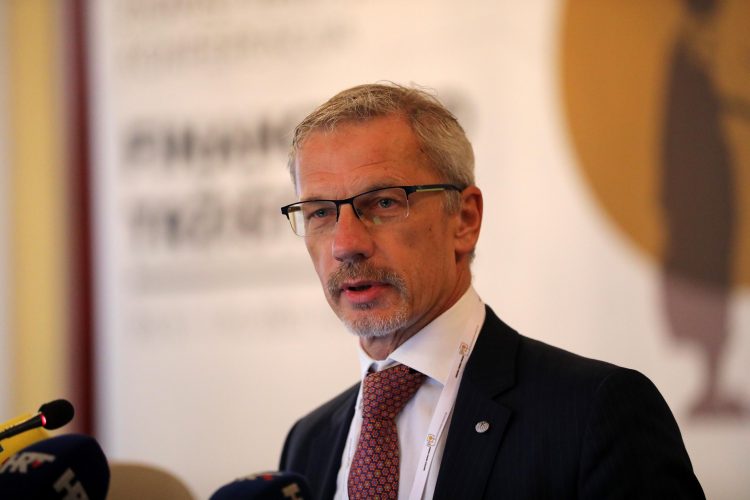 Central bank governor Boris Vujcic on Thursday reassured opposition MPs that inflation has not deviated significantly, and that the euro adoption would bring many advantages to Croatia.

Vujcic, who presented the Croatian Central Bank (HNB) report on the public finances in the second half of 2020, said that HNB had maintained price stability.

The stability of the inflation rate has been defined at 2 percent, and this year we expect that it will be 2.3%, which means that there won’t be any significant deviation and we estimate the majority of shocks will be of a short term nature, Vujcic said in parliament after MPs expressed concern over the recent price hike and inflation.

“We are maintaining price stability, we have stabilised the market and enabled wages to increase faster than prices. The living standard in Croatia is increasing and the HNB will continue to maintain the stability of the exchange rate and with that, relieve import pressure,” underscored the governor in his response to questions by MPs.

The inflation is being caused primarily due to the increased price of energy and food, Vujcic explained, adding that this is primarily related to import components.

The most important thing was to not allow the exchange rate to impact an increase in prices of imported commodities, he said, pointing out that not all the food prices had risen, and that it was the prices of oil and lard that had increased most, while the price of most other articles had remained stable or gone down.

With regard to introducing the euro currency, Vujcic said that Croatia would benefit from introducing the euro, improving its standard and removing exchange rate risks. Also, interest rates would fall and the country’s credit rating would improve, making Croatia more attractive for investments.

Introducing the euro is yet another structural reform in itself and it should act as a catalyst for structural reforms, similar to when we entered the EU, Vujcic said responding to MP Stephen Nikola Bartulica (right-wing DP party) who claimed that the euro changeover was an alternative to reforms that weren’t conducted.

Vujcic noted that Croatia is a highly euroised country and entrepreneurs especially support the introduction of the euro as 80% of their debts are denominated in the euro currency.

“Had we been in the monetary union during the pandemic years, it certainly would have been a lot easier. We could have relied on the European Central Bank, there would not have been any attacks on the Croatian currency, the Croatia’s debt on the bond market would not have had an exchange rate risk,” concluded Vujcic.

During the parliamentary debate, Vujcic rejected criticism by MP Marija Selak-Raspudic (conservative Most party) that HNB had failed to promptly respond to tacit overdrafts on current accounts.

After consumers complained, we reacted promptly and we will resolve the situation so that in the case of tacit overdrafts the same consumer protection standards will be provided as for authorised overdrafts. If their overdraft limits are reduced, consumers will be allowed to repay their dues at an effective interest rate of 7.62% and people need not fear that their overdrafts will be cancelled, said Vujcic.