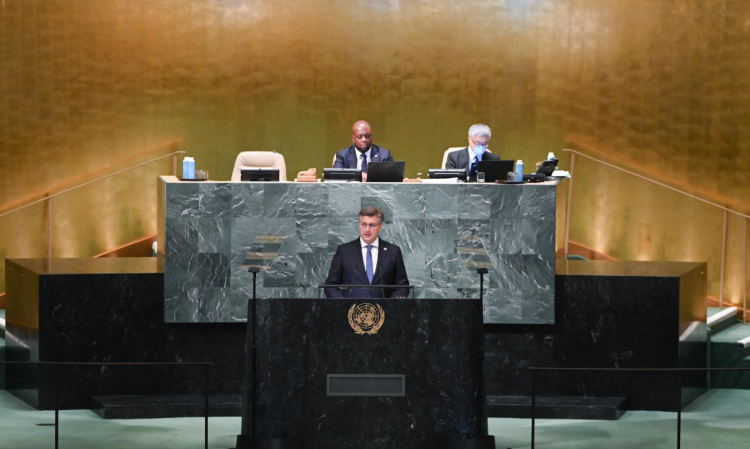 Prime Minister Andrej Plenkovic said on Friday in his speech at the UN General Assembly that the consequences of the Russian aggression "are felt globally" and that greater international cooperation has no alternative.

“Russia’s aggression against Ukraine has brought about human suffering, refugee flows, destruction of the civilian infrastructure and war crimes,” Plenkovic said at the start of his speech at the 77th General Assembly in New York.

The latest announcements about partial mobilisation in Russia, preparation of organisation of sham referenda on the territory of Ukraine and nuclear threats are another dangerous escalation of the already unprecedented crisis, the Croatian PM said.

He recalled that three decades ago, Croatia itself was “a war-ravaged country”, exposed to the aggression and nearly a third of its territory had been occupied while the country had also been under an arms embargo.

“The Croatian people know what it means to be under attack and what it takes to defend their homeland.”

Being stronger from its own experiences, Croatia is today an exporter of peace and stability, and humanitarian donor worldwide, a popular tourist destination, and the country that produces the fastest electric car in the world, said Plenkovic.

He recalled that in October, Zagreb will host the first parliamentary summit of the Crimea Platform and that his country remains committed to the strengthening of democracy.

“On the crossroads between democracy and autocracy, our choice should remain clear.”

The Croatian PM warned that the war in Ukraine has “radically changed not only the security but also the energy architecture of Europe” and threatens global food security.

“We can not be held hostage over food and energy which all of us need.”
On the regional level, Croatia is contributing to energy security.

Simultaneously Croatia also investing in renewable energy sources.
Nearly a half of our electricity production comes from renewables, PM informed the General Assembly.

One percent of the richest in the world is responsible for 15% of greenhouse gas emissions, and he described it as unacceptable and unfair.

Those who pollute the most should make the most efforts in the fight against climate change, he added.

Despite the current crises, the world should remain committed to the Paris climate agreement’s targets and he called for stepping up cooperation at the national, regional and global level in response to climate change.

In his speech, Plenkovic recalled that Croatia would soon enter the euro area and the Schengen area which will make the country’s position stronger.

PM calls on High Rep to use Bonn powers

In his speech, Plenkovic commented on the developments in southeast Europe.

“Stability and democratic development of that region are not only in Croatia’s interest but also in Europe’s interest.”

For Croatia, the stability of Bosnia and Herzegovina is of particular importance.

“We would like to see a prosperous and functional Bosnia and Herzegovina.”

He said that it is important to comply with the Dayton agreement in light of the current situation in Ukraine and elsewhere.

The PM called on the international community’s High Representative Christian Schmidt to use his powers after the Bosniak leader publicly admitted that they have no true intention to come to a deal with the Croat leaders in Bosnia and Herzegovina on the electoral reform.

“The only way forward remains for the High Representative Christian Schmidt to act and use his Bonn powers” to enable the Croats to have their legitimate representation, says Plenkovic.

“As the least numerous among the constituent peoples, the Croats in Bosnia and Herzegovina demand no favours only equality.”

He also called for the global response and regulation of gas prices.

“Our world has changed permanently. In these new circumstances, more international cooperation has no alternative.”

The approach of democracies in international relations is a cooperative one and the approach of authoritarian regimes is conflictual, he said.