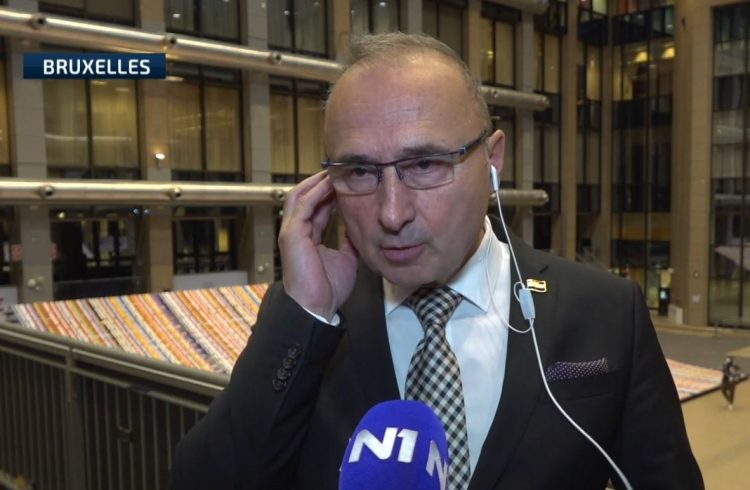 He was there to attend a conference dedicated to Bosnia’s EU integration. Grlic-Radman added that he came there to “conveyed a message from Prime Minister, Andrej Plenkovic,” about his “support to issues that are of vital interest for Bosnian Croats.”

Earlier on Wednesday, Bosnia’s election commission set the date for the scheduled general election, for 2 October. Hina explained that this happened “despite the fact that provisions defining the way delegates are elected to Bosnia’s House of Peoples have been erased.” The only member of the xi-member commission to oppose the decision was its Bosnian Croat member Vlado Rogic.

According to Grlic-Radman, “there were no legal preconditions for to call the election.”

“We believe that the election commission has assumed the prerogatives of the constitution-maker and legislature, which it cannot do. It is merely an administrative body, and is not competent with regard to the erased articles of the election law,” said Grlic-Radman, noting that the erased positions suggest that the law is deficient.

The provisions Grlic-Radman was referring to were struck from Bosnia’s election law in 2017, upon complaint filed by an umbrella organization of Bosnian Croats. Back then, Bosnia’s Constitutional Court ruled to erase provisions regulating the indirect election of deputies to the House of Peoples of the BiH Federation (FBiH) – the upper chamber of the Bosniak-Croat half of the country.

The Court then asked the national parliament to amend these regulations in order to “prevent manipulation in the election of representatives of the three constituent peoples in that chamber.” Hina did not clarify any further.

“The Constitutional Court also erased a provision under which each of the ten cantons in the entity had to elect a representative of the constituent peoples to the House of Peoples if they were elected to the cantonal assembly. That segment has remained undefined throughout the election reform process,” Hina explained.

Grlic-Radman said that fixing this falls to the country-level Parliament, and that the election commission “cannot decide on the composition” of the House of Peoples in FBiH. “The House of Peoples is a constitutional category and cannot be filled by an administrative body,” he added.

He expressed disappointment that the largest ethnic Bosniak party in the country, SDA, “had obstructed the election reform” and added that “outvoting Bosnian Croats would not do good to anyone.”