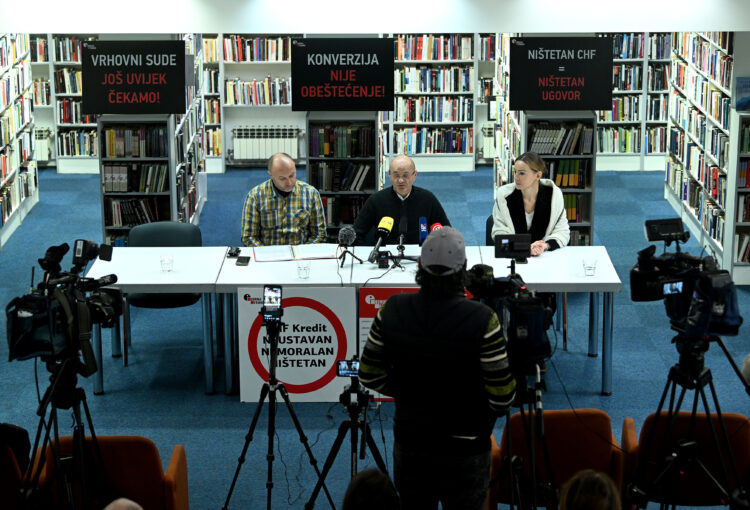 The Franak NGO has filed a criminal complaint against the government agent before the Court of Justice of the European Union, Gordana Vidovic-Mesarek, accusing her of giving a false statement in court and causing damage to consumers who converted loans pegged to the Swiss franc into euro loans.

The association’s coordinator, Goran Aleksic, said at a news conference on Monday that Vidovic-Mesarek had given “a series of false statements, which have no basis either in the Law on Conversion or in the factual and legal situation at the time of the conversion” and thus caused damage to consumers who converted their loans.

“The criminal complaint indirectly accuses the government, which for incomprehensible reasons is working and lobbying in favour of banks that harmed consumers by applying void contractual provisions to CHF loans,” said Aleksic.

Some 50,000 consumers have not converted their CHF-linked loans, while 35,000 have converted them. According to the Law on Conversion, creditors are prohibited from imposing additional provisions on consumers that would derogate their other rights, Aleksic added.

​”The government and agent Vidovic-Mesarek’s intentions are obvious, to help the banks keep the looted money and this is €1.5 billion that the banks owe to citizens who converted CHF loans into euro loans,” he added.

Frank also intends to ask the European Commission to initiate proceedings against Croatia at the EU Court for violating European law.