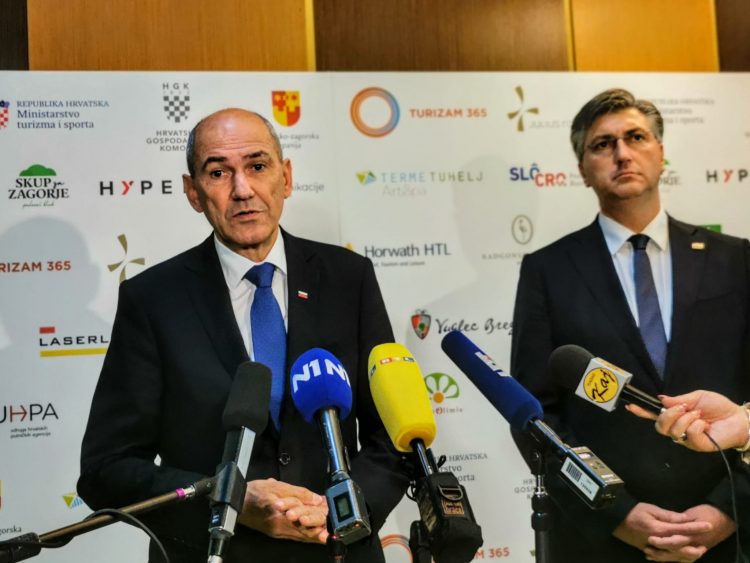 During their participation in the "Tourism 365" conference in Tuheljske Toplice on Friday, the Croatian and Slovenian prime ministers, Andrej Plenkovic and Janez Jansa, confirmed the very good bilateral relations and confidence that Croatia's admission to the euro area will improve economic cooperation between the two countries.

Plenkovic said it is “only normal” that relations with Slovenia are good and close. He assessed that in the past five years, prudent policies were pursued which respected the interests of both countries.

“We are trying to resolve outstanding issues, which will not lead to any disruptions in relations between business people and numerous Slovenian citizens coming to Croatia,” said Plenkovic.

“Slovenians have houses here, holiday homes, boats. They love Croatia and spend time here. Our people love Slovenia. They go there on ski trips and outings. We need to nurture that. That is the sense behind intelligent politics,” said Plenkovic.

He said that he is an optimist, with Slovenia’s support, Croatia will join the Schengen and euro areas.

Slovenia is one of Croatia’s most important trading partners and all the preconditions exist for cooperation to be better, he added.

“I think that we have to work on those relations with regard to culture. This conference is a brilliant example of that for a broader circle of people to realise that we are OK with each other because there was a time when relations between Croatia and Slovenia were hallucinatory, with military boats and the like,” he said.

Slovenia’s Prime Minister Janez Jansa said he believes that cooperation between the two countries is better than they were before, adding that Croatia’s accession to the euro area will contribute to even better economic cooperation.

Speaking about tourism, Plenkovic said that the numbers show that the epidemiological measures were targeted “very well.”

“We didn’t have any large protests. What can’t be done in Croatia today? The only thing missing is large gatherings and nightclubs. We have tried to balance everything. We tried to incorporate everything with the least damage possible,” said Plenkovic and added that visitors arrived in Croatia with confidence and trust that everything was alright.

On the other hand, Slovenia had “hard” measures and Jansa said that that was a different situation because when the coronavirus crisis erupted, his cabinet just started its term in office.