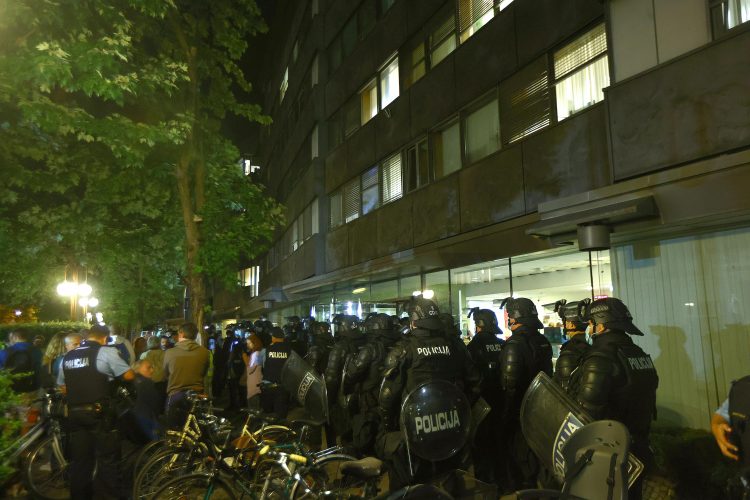 A group of people who believe that the coronavirus does not exist have been protesting in front of the RTV building on Kolodvorska Street in Ljubljana every day. Last night at around 8 pm, they broke into the RTV building, more precisely the studio where evening news is filmed.

Police arrived at the scene and repeatedly urged them to leave the studio and the building but they refused to listen to their calls.

RTV Slovenia’s journalist Barbara Vidmajer posted a video of the intrusion into the studio on her Facebook profile. As she told N1, coronavirus deniers jumped through the door in the lobby of the building. They walked down the halls to the TV Slovenia studios. Since they did not want to leave the studio despite repeated calls, the police had to drag them away.

TV anchor Tanja Staric told N1 that they had been warning the authorities for months that the situation was becoming unbearable, but that no one had done anything.

Journalist Gregor Drnovsek said that the protests so far have been mostly peaceful and that RTV employees have only been the target of individual remarks.

“We could listen for hours to various conspiracy theories, accusations that we are murderers, nits and poisoners on the RTV. This made us nervous, put us in a bad mood, and even angry(…) that they had an official camping permit in the intervention area around the building which was truly unbelievable,” he added.