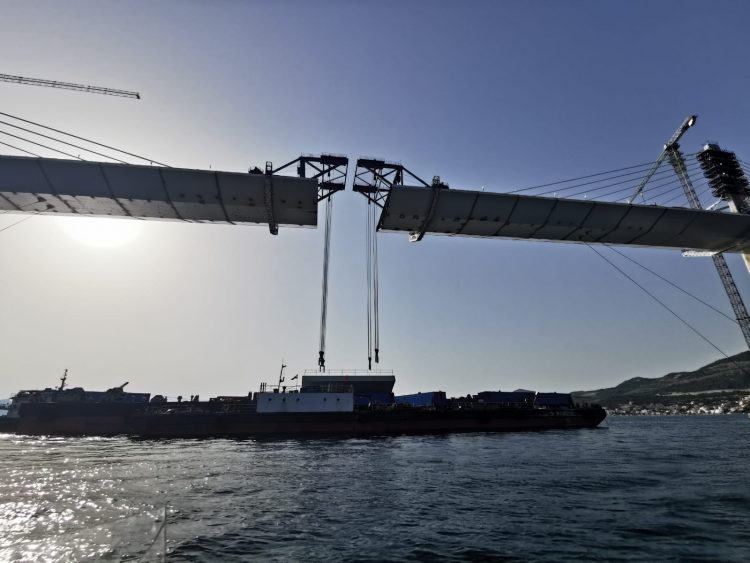 The final segment of the Peljesac Bridge is being installed, and while Croatia is celebrating the moment as a success, Bosnian officials and experts say that it represents a defeat for Bosnia since the country did not manage to protect its waters from the project.

The Peljesac Bridge will link the Croatian mainland and the Peljesac Peninsula, bypassing a 15 kilometre-long strip around the city of Neum that represents Bosnia and Herzegovina’s only coast on the Adriatic Sea.

The bridge would cut travel time between the Dubrovnik area and the rest of the country by circumventing customs and border controls around Neum.

In a statement for the Croatian Hina news agency, Croatia’s Minister for Sea, Transport, and Infrastructure, Oleg Butkovic, called the bridge “the most important and largest infrastructure project currently underway in Croatia.”

“It will finally connect our territory and we can say that the government has accomplished a dream that many wanted to abandon,” he said.

But Bosnian officials, predominantly those from Bosniak political parties, have argued for years that the construction of the bridge could prevent large vessels from entering Bosnia’s Bay of Neum, threatening the country’s access to the open sea.

According to BiH House of Representatives member Adil Osmanovic, a “great injustice” was committed against Bosnia with the construction of the bridge.

“BiH is a maritime state and has the right to free access to the open sea, which means that nothing can be built in that area. This is the case according to the UN Convention, however, when it was adopted, no one could have guessed that political leaders would work against their own country in the institutions,” he said, referring to Bosnian Croat political officials, who have supported the project.

“Now Croatia is not being fair because they stated that they had communication with BiH institutions, and no one was consulted regarding the height, there is no official document anywhere,” he said.

Osmanovic stressed that the European Union bears the responsibility for this injustice since “Croatia used its membership and the European Commission” to complete the project.

“We just need to make sure that BiH has free access to the open sea, which means that a ship from our country can enter without any checks,” said Osmanovic.

According to Nesad Alikadic, an expert on maritime traffic, Bosnia must have free access to the open sea according to international law.
However, he blamed BiH for the situation since the country signed an agreement on borders with the Republic of Croatia in 1999.

“Specifically, (former presidents) Alija Izetbegovic and Franjo Tudjman signed a contract that is harmful to BiH,” he said.
This agreement was, however, never ratified.

According to Hilmo Sehovic, a former advisor in the Ministry of Energy, Mining and Industry of Bosnia’s Federation (FBiH) entity, this is all a result of the “inferior politics” of Bosnia and Herzegovina, arguing that the country does not have the adequate political officials “educated enough to protect BiH’s sovereignty and territorial integrity.”

Croatia’s former Interior Minister, Mirko Kovac, said that Croatia maintained contact with BiH throughout the construction of the bridge, saying “now I don’t understand the effort to question this project.”

Former Croatian Prime Minister, Jadranka Kosor, told N1 that the Peljesac Bridge is a “European bridge” and that it will not cause any damage to BiH and that Croatia has a right to connect its own territory.

If this was not the case, the EU would not have allocated €357 million for the project, she stressed and noted that it is unfortunate the 1999 border agreement between the two countries was not ratified.

“As always, I am certain that all problems with neighbours should be discussed. The problem is that there has been no real dialogue between our two countries for a long time,” she said.