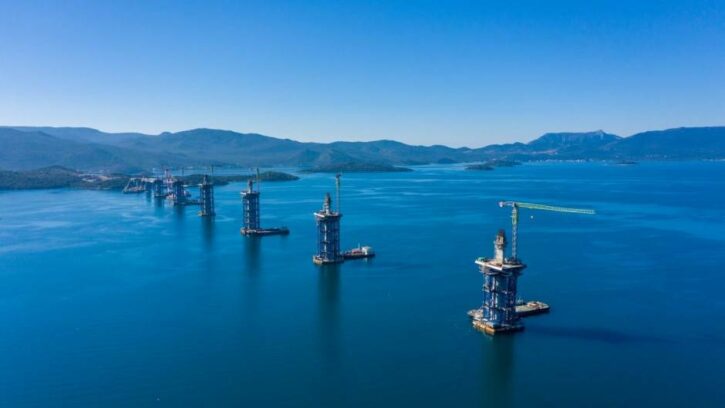 Prime Minister Andrej Plenkovic on Tuesday visited the Peljesac Bridge construction site in Komarna, noting that the bridge will be connected with span structures by October this year, which means that "the main goal will be attained - to ensure the integrity of the state territory," Croatian state agency Hina informed the public on Tuesday.

Plenkovic also walked along the Peljesac Bridge, crossing the 300-metre-long section accompanied by the Minister of Transport, Oleg Butkovic, and the CEO of the Hrvatske Ceste state-owned road company, Josip Skoric, who “acquainted him” with the pace of the work on the bridge.

“Today, we had the opportunity to walk along the Peljesac Bridge for the first time,” Plenkovic told reporters, adding that “only 24 more span structures need to arrive from China,” which will happen in May. “The bridge will be connected with span structures by October this year,” he said.

PM Plenkovic also stressed that “at that moment we would attain our main goal – not only connecting the southern part of Dubrovnik-Neretva County with the rest of the county – but ensuring the integrity of the Croatian territory.”

“In the long term, that is the greatest achievement of this €526 million project, financed by European funds,” Plenkovic said, congratulating all contractors.

Underscoring the importance of the Peljesac Bridge, the Minister of Maritime Affairs, Transport and Infrastructure, Oleg Butkovic, said that the construction was “going well” despite the coronavirus pandemic as there had no been no major delays.

Butkovic said that it was expected that the Peljesac Bridge would be open to traffic and access roads would be completed in June 2022.

The CEO of the Hrvatske Ceste road company, Josip Skoric, added that works on the Ston bypass were also progressing, after the initial difficulties.

“We can be pleased with the current pace,” he said.