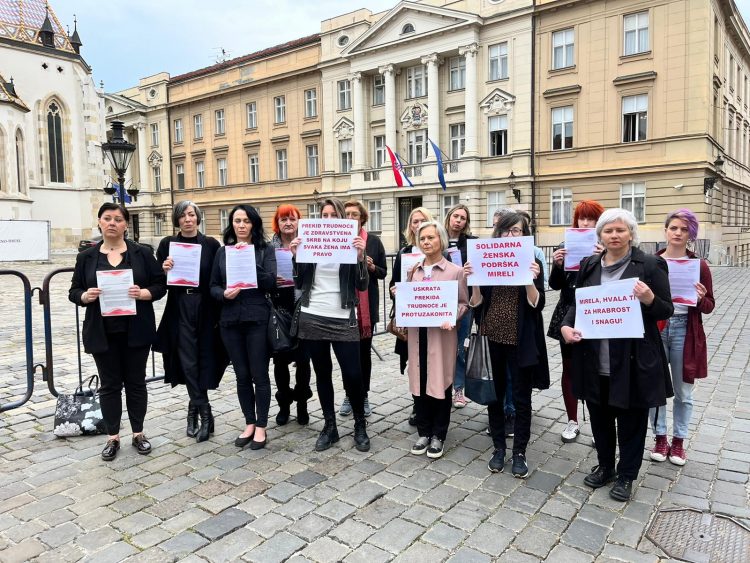 Croatian civil society organizations on Friday demanded that the authorities "urgently ensure pregnancy termination" for Mirela Cavajda, a 39-year-old woman whose request to hospitals to terminate her pregnancy after her unborn baby had been diagnosed with an aggressive brain tumor, was denied.

The case attracted lots of publicity in the Croatian media recently, and rekindled the debate on abortions.

Although legal since the 1970s, doctors at state hospitals are allowed to declare themselves conscientious objectors and refuse to perform abortions. This means that in the largely Catholic country many hospitals simply have no one on staff willing to terminate pregnancies. However, the information on this is not publicly available or declared, which means that in practice every abortion is dealt with on a case-by-case basis.

In addition, for later-stage pregnancies with complications – including the Cavajda case – the law stipulates that a hospital should form a commission to approve any abortion. Cavajda reportedly contacted several hospitals in Zagreb with her request to terminate her pregnancy after prenatal scans have showed that the fetus inside her is malformed and is unlikely to survive the birth. According to local media, all the hospitals turned her down.

“The health system must ensure and cover the cost of an urgent procedure of pregnancy termination for Mirela Cavajda and determine the responsibility and penalize those who have failed to provide timely and adequate care,” a letter sent to the media by more than 60 civil society organizations said. They also demand that the government “secures the right to a safe termination of pregnancy.”

The letter was sent to Prime Minister, Andrej Plenkovic, and Health Minister, Vili Beros, and were read out outside the Parliament and government buildings by pro-choice activists on Friday.

In the letter, the activists asked Beros and Plenkovic to “clearly confirm” that Cavajda would be given adequate care paid for by the public health care system, and called for “dealing with the chaos in the health care system.”

Activists also demanded that the pregnancy termination procedures are made available in Croatia, that information on the ability of medical institutions to provide the procedure is urgently made public. They also called for the creation of a public register of medical workers who object to pregnancy termination. They said that Cavajda’s struggle was “the struggle of all women.”

Their demands were publicly supported on Friday by opposition MPs from the center-left, left, and liberal parties. They also called for a new abortion bill as the current law in force dates back to 1978. The Constitutional Court’s ruling on a related complaint from 2017 asked the Parliament to pass a new law within two years. The court’s recommendation has been successfully ignored ever since.