President Milanovic: I think Vucic is proud of his wartime role 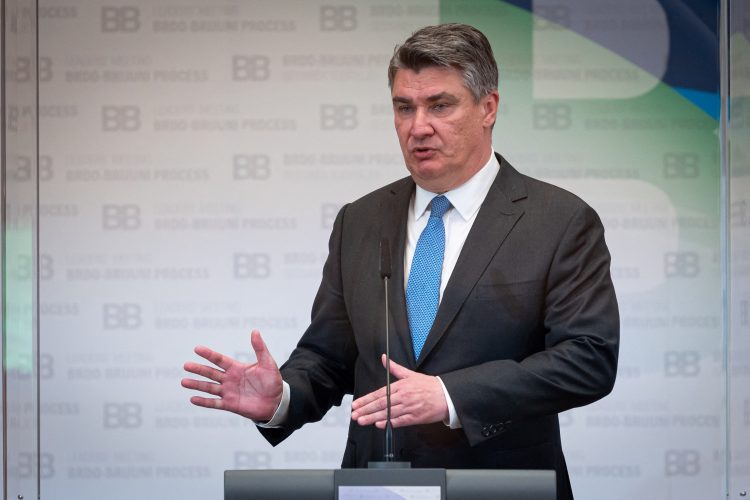 Croatian President Zoran Milanovic, who is currently in New York attending the UN General Assembly, said on Tuesday that Serbia's leader, Aleksandar Vucic, had "incited war" in the 1990s, and that "he was probably proud of that," Croatian state agency Hina reported.

This echoed his earlier comments he made in a talk at Columbia University on Monday, when Milanovic said that Vucic “had been a warmonger.” His comments apparently “set off a storm in Serbia,” Hina said.

“You can’t ignore the roles some people played in our region over the last 30 years. Blood was spilled, there was arson, killings, and some people incited others to do that,” he told reporters on Tuesday, adding that “Croatia has gentlemanly let this pass, but it won’t bury its head in the sand as many in Serbia are doing.”

In the 1990s, Vucic was a prominent member of the far-right nationalist Serbian Radical Party led by Vojislav Seselj who was later convicted for war crimes at the Hague tribunal. The party was briefly in coalition with the late strongman Slobodan Milosevic’s Socialists and during that time Vucic served as Information Minister.

“I think Vucic was proud of what he was doing. This is something that should be said from time to time, especially when someone… sends out on a daily basis his political holograms, spokesmen, and agitators to say on his behalf whatever pops into their heads. That’s dirty and cheap,” Milanovic said.

Milanovic was probably referring to Serbia’s Interior Minister, Aleksandar Vulin, who had responded to Milanovic’s comments about Vucic on Monday by calling him “one of the dumber politicians in Croatia.”

Also on Monday, Vucic, who is not attending the UN General Assembly, chimed in, saying that Milanovic was spreading “shallow and low insults” out of envy because “Croatia is jealous of Serbia’s economic success.” In a press release, he said that Milanovic was “bothered by the fact that this year Serbia would surpass Croatia” in GDP “by a €300 million to €600 million margin.”

“Serbia has a bigger total GDP even than Luxembourg. But Croatia’s and Serbia’s GDPs per capita are not even close. Serbia is much closer to Albania there,” Vucic was quoted as saying by Hina. “In terms of general development, Serbia is not at Croatia’s level. Life in Croatia is better and richer than in Serbia by all parametres,” Vucic added.

According to World Bank data, Luxembourg’s GDP in 2020 was about $73.2 billion, or roughly 40 percent larger than Serbia’s.

On Tuesday, Milanovic met with President of Turkey, Recep Tayyip Erdogan, and later told reporters that “they had a friendly talk on Bosnia and Herzegovina.”

“What I say in public, I also say at such meetings,” he said, adding that Turkey’s foreign and defence ministers were also at the “quite open and very pleasant” meeting.

Milanovic has been a vocal advocate for election reform in Bosnia, where ethnic largely Catholic Croat nationalist parties have a hard time getting their candidates into office at the federal level, as the largely Muslim ethnic Bosniak voters outnumber Croats 3 to 1 in the Bosniak-Croat entity that forms half of the country.

However, Milanovic is keen to make the distinction that calling for election reform does not equate breaking up Bosnia and Herzegovina, in contrast to Bosnian Serb leader, Milorad Dodik, who often openly floats the idea of the Serb half of the country seceding to potentially join Serbia proper.

The heartland of Bosnian Croats is in the southern Herzegovina region, with the city of Mostar as its largest city and political center.

“What I underlined to Mr Erdogan is that there is no one in Croatia throwing around any ideas that Mostar and Herzegovina might secede, which we hear from some others about some other parts of Bosnia and Herzegovina. And that would not be smart nor necessary. In Croatia, no one advocates such a policy, and such outcomes,” Milanovic said.

While in New York, Milanovic was supposed to meet with UN Secretary-General, Antonio Gutteres. However, the meeting was cancelled by Milanovic, who said he had “more important commitments,” Hina reported.

“That wasn’t even supposed to be a meeting but a photo op and a five-minute talk,” Hina quoted Milanovic as saying. “At that moment, I assessed that I had something more productive to attend to, an informal meeting concerning the region, state business,” Hina said, without adding any details.