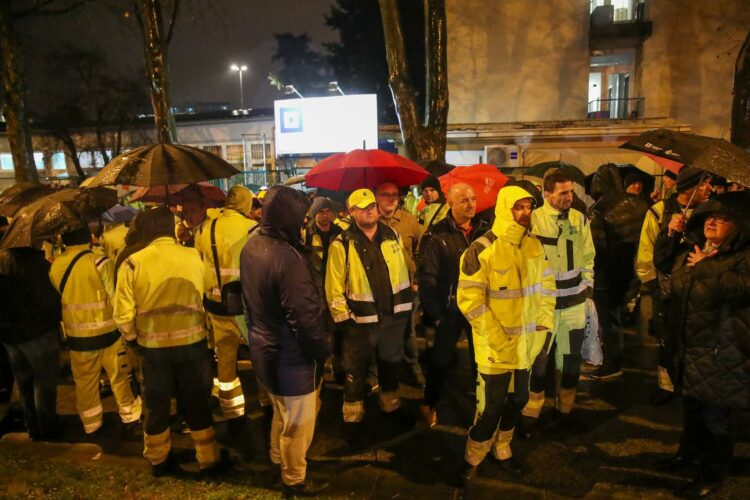 Several hundred municipal sanitation workers went on a spontaneous strike in the Croatian capital Zagreb on Monday in solidarity with three of their colleagues, who were notified that they would be fired after they were filmed throwing different fractions of waste into the same truck and failing to comply with the obligation to separate waste.

The strike of around 400 employees of the Cistoca waste management company began at the company’s headquarters at six o’clock this morning, when they refused to go to work at their own initiative just before the start of the shift. They gathered in front of the headquarters of Cistoca, expressing dissatisfaction with the sanctions threatened against three of their colleagues.

The strike followed an incident involving the removal of waste in Zagreb’s neighbourhood of Sredisce, where Cistoca workers were filmed throwing different fractions of waste (paper, mixed waste, bio-waste, and plastic) into the same container, which is contrary to the obligation of separate waste collection.

The video caused public concern and reactions among the opposition in the City Assembly, after which Mayor Tomislav Tomasevic announced that those responsible would be identified and sanctioned, stressing that it was an “isolated case”.

This triggered a spontaneous gathering of workers, who, according to a video shared on Facebook by the Most party member of the City Assembly, Trpimir Goluza, persist in demanding that their colleagues return to work.

“We demand the return of the workers, not a single worker will leave here until they return, at the cost of all sanctions and dismissals”, one of the striking workers said.

Although they claimed that the strike was organised spontaneously, the leader of the Cistoca Union, Mirjana Kaltak, was among the workers on strike.

Kaltak said she was invited to a meeting with the management of the Zagreb Holding multiutility company together with union commissioner Zdravko Stoilkovic.

Zagreb Holding has not commented on the strike for now.