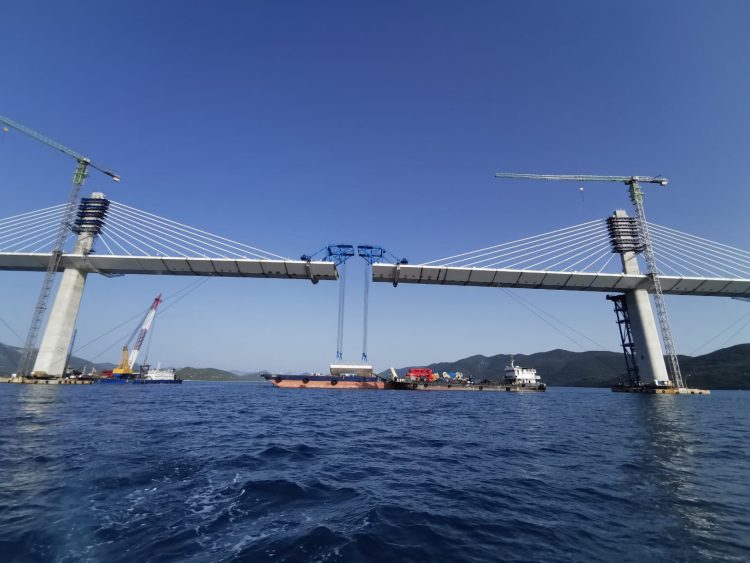 "With the installation of the last, 165th segment of the steel span of the Peljesac Bridge on Wednesday evening, the bridge will be finally joined together from Komarna to Brijesta and provide a long-awaited road link between the southernmost part of Croatia with the rest of the country, a project that was neither easy nor without obstacles," state news agency Hina declared on Wednesday.

“The Peljesac Bridge is the most important and largest infrastructure project currently underway in Croatia… It will finally connect our territory and we can say that the government has accomplished a dream that many had wanted to abandon,” Minister for Sea, Transport and Infrastructure, Oleg Butkovic, told Hina. He did not explain who “wanted to abandon” the project.

Butkovic added that the bridge is among the “largest structures of its kind built in Europe in the 21st century.”

Work on the 2.4-kilometer bridge, connecting Croatia’s Peljesac peninsula with the mainland to bypass a short stretch of the Bosnian coastline at the town of Neum started three years ago. The project is worth €550 million, although most of the funding – €357 million – came from the European Union.

The contract to build the bridge was awarded to the Chinese state company China Road and Bridge Corporation (CRBC), who had imported workers and material used to construct the project from China. But smaller contracts for access roads required for vehicles to approach the bridge were awarded to Austria’s Strabag and the Greek Avax construction companies.

Although the last segment of the bridge will be installed on Wednesday evening in a spectacular photo op attended by members of PM Plenkovic’s cabinet and an impressive entourage of party and state officials, the bridge will not open for traffic for at least a year from now.

“The bridge itself is a very complex construction project, but so is the rest of the project, namely access roads running through the Peljesac peninsula and the Ston ring road. That segment is more than 30 kilometers long… Work is currently underway on two viaducts, three bridges and four tunnels, of which the Debeli Brijeg tunnel is the fifth longest in Croatia. Three of the four tunnels have been drilled and the pace of work is satisfactory so we expect the access roads to be completed in the summer of 2022, which will mark the completion of this long-awaited project to connect the southernmost part of Croatia with the rest of the country by road,” said Butkovic.

“The decades-long dream of connecting Croatia resulted in a government decision of February 2017 to finance the project, which was to be co-financed by the European Union. The decision was a precondition for the project to be launched,” Hina said.

Before that, in May 2013, the European Commission had ordered a preliminary feasibility study which showed that the Peljesac Bridge was the best solution for joining Croatia’s south with the rest of the country.

After JASPERS, an EU technical assistance facility which provides the member states with the support they need to prepare high quality major projects, which will be co-financed by EU funds, okayed the Pelješac Bridge project, the European Commission made a decision to co-finance it with €357 million.

The state road management company Hrvatske Ceste in 2016 published a document envisaging work on the bridge in four stages, including the construction of access roads, the bridge itself, a road on Peljesac, and the construction of the Ston ring road, with the duration of the project set at five years. The total value of the project was initially set at €420 million, of which the EU was to contribute €330 million or 78.5 percent.

With Croatia’s 25 percent VAT, the amount totals around €550 million.

The 2,440-metre bridge is a hybrid structure, with 13 spans, of which five central spans are each 285 metres long, six 33-metre-high centrally installed pylons made of reinforced concrete, and two lanes, plus a hard shoulder for bridge maintenance. The bridge’s designer is Marjan Pipenbaher of Croatia.

In January 2018, three bidders competed for the project – the Chinese CRBC-led consortium, Austria’s Strabag construction company, and an Italian-Turkish consortium. CRBC won the bid, offering to build the bridge for 2.081 billion kuna (€277 million), excluding VAT. The timeline for the completion of the project was set at 36 months.

China Road and Bridge Corporation is a subsidiary of the state-owned China Communications Construction Company (CCCC) specializing in the construction of highways, bridges, ports, tunnels, drainage systems and other civil engineering structures. The company also manufactures and sells road machines.

The start of construction was initially delayed due to complaints to the tender held by the state-owned Hrvatske Ceste. Both losing bidders – Austria’s Strabag and the consortium comprising Italy’s Astaldi and Turkey’s IC Ictas Sanayija – lodged formal complaints, which were eventually dismissed by the state commission for public procurement.

On 31 July 2018, construction was officially launched. Lu Shengwei, a representative of the Chinese contractor, said then that work would be completed on time and that local companies would be hired, as was always the case with the company’s international contracts.

Following delays due to the bidders’ complaints, some Bosnian officials also threatened to file an international lawsuit, claiming that the bridge could potentially infringe upon Bosnia and Herzegovina’s access to international waters. However, no formal move has been made to block the building of the bridge.