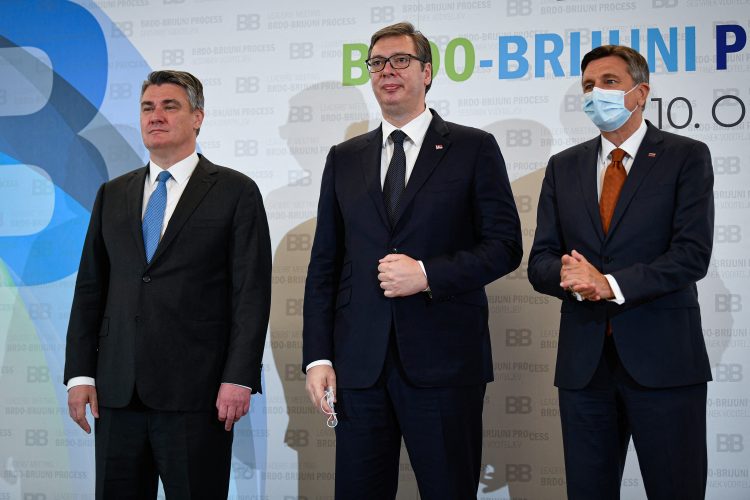 The participants in Monday's summit of Western Balkan heads of state as part of the Brdo-Brijuni Process endorsed a joint statement in Brdo Pri Kranju which leaves out the recognition of existing borders that was present in the draft text.

In the statement, they call on the European Commission and EU member states to treat aspirants as a whole for geo-strategic reasons and to step up their accession through admission in a package, provided the membership candidates persevere with reforms as much as possible.

The most contentious aspect in endorsing the statement was an attempt to have it mention the recognition of existing borders, so this was eventually left out from the draft text which Presidents Borut Pahor of Slovenia, the summit host, and Zoran Milanovic of Croatia called a compromise.

The joint Brdo Declaration, according to the unofficial text given to the press, does not mention the inviolability of existing borders, which Pahor discussed last week with his hosts in Pristina and Belgrade while preparing the summit.

After that meeting with Pahor, Serbian President Aleksandar Vucic spoke of the “West’s hypocrisy,” saying that in some situations the West spoke of the inviolability of borders, disregarding the events from the 1990s and the fact that, under Serbia’s constitution, Kosovo is part of Serbia.

Vucic said he had proposed to Pahor an amendment to the draft statement on the inviolability of borders under which that would concern only states in line with the UN charter and those with broad international recognition but not Kosovo, which is not recognised as a UN member.

Kosovo has also not been recognised by EU members Cyprus, Greece, Romania, Spain and Slovakia.

At today’s press conference with Milanovic, Pahor said the endorsed text of the joint statement was a compromise.

The Brdo Declaration also mentions the need for lasting reconciliation and stability in the region and for shedding light on the war missing, as well as calling on the EU to liberalise the visa regime as the most effective tool for the Western Balkan states’ transformation towards EU membership.