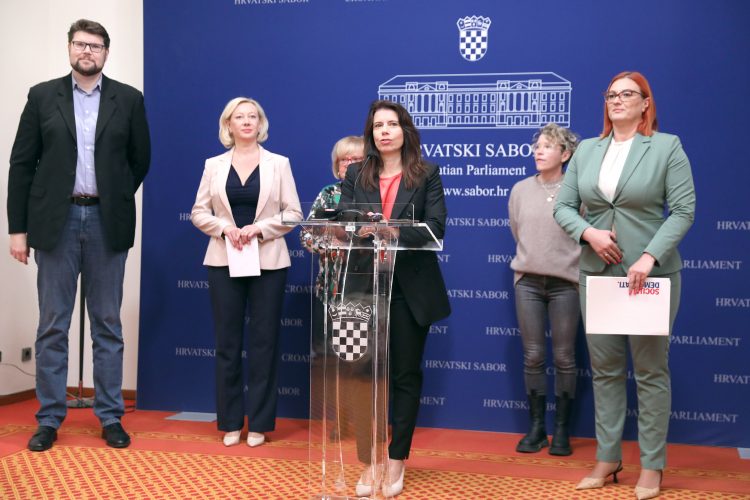 Leftist and green opposition MPs on Monday called on Croatian public to take part in the public discussions on constitutional changes and show they want women's right to abortion to be incorporated in the new Constitution, state agency Hina said on Monday.

MP Katarina Peovic (Workers’ Front), who launched this initiative, recalled that this right was incorporated in the 1974 Constitution and in the draft Constitution of 1990, “from which it was later removed.”

“Our aim is to reinstate abortion in the Constitution to protect this fundamental right, which is under threat from conscientious objectors and global trends,” Peovic told a press conference. She claimed that a vast majority of voters of the ruling conservative Croatian Democratic Union (HDZ) are also in favor of women’s right to choose.

MP Pedja Grbin (Social Democratic Party) said they would not “give up the fight for women’s right to choose.”

MP Romana Nikolic (Social Democrats) also supported the initiative, saying that women’s right to choose is regulated “by the spirit of the Constitution.”

“We don’t want the interpretation of constitutionally guaranteed human rights to depend on the ideological affiliation of those in power,” she said. She called on the government to respect the Constitutional Court ruling and put forward a new abortion bill that would also regulate the issue of conscientious objection.

MP Ivana Kekin (Green-Left Bloc)  said that in many cases abortion on request is not available or safe in Croatia and that this is why this right should be included in the Constitution as a guarantee that Croatian women will be able to exercise it regardless of who is in power or who will win elections.

MP Natalija Martincevic, a member of the Fokus, Reformists and Independents group, warned of “a creeping, yet very effective, radicalization of society.”

The public consultation on the proposal to amend the Constitution is open until 20 October. The parliamentary groups of the Social Democrats, Social Democratic Party, Peasant Party, Workers’ Front, Centre, Civil Liberal Alliance, Istrian Democratic Party, Fokus, Reformists and independent MPs announced that they would make available a form which Croatians would be able to use to propose that women’s right to abortion be included in the Constitution.

Amending the Constitution requires two-thirds support in the 151-seat Parliament.