SNV commemorates Serb civilians killed at Uzdolje near Knin in 1995 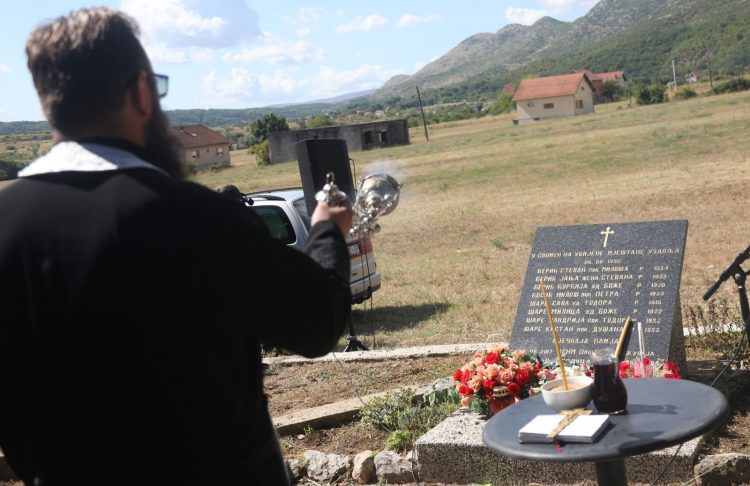 The southern municipality of Biskupija and the Serb National Council (SNV) on Friday held a commemoration in Uzdolje near the Croatian town of Knin for civilian victims of the 1995 military and police Operation Storm, at a site where eight Serb civilians were killed on 6 August 1995.

In 2017 the SNV branch in Biskupija and the association of the families of missing persons “Protiv zaborava” (Against oblivion) unveiled a memorial commemorating the civilians killed at Uzdolje.

Today a religious service was held for the victims at the site and wreaths were laid and candles lit at the memorial by local ethnic Serb officials and Serb minority MP Anja Simpraga.

The SNV recalled in a statement that the Documenta – Centre for Dealing with the Past nongovernmental organisation in August 2017 filed a criminal report against unidentified perpetrators for the crime committed at Uzdolje.

“The criminal report, which no institution has yet acted on, relies for the most part on facts about the crime on which light was shed in an investigation by the International Criminal Tribunal for the former Yugoslavia (ICTY), primarily by witness statements,” the SNV said.

It recalled that the investigation by the ICTY showed that three men, wearing camouflage uniforms with Croatian Army insignia on them and armed with machine guns, arrived by car in Uzdolje’s hamlet of Sare in the morning of 6 August 1995.

They started abusing and intimidating elderly people they found in the hamlet, taking away a group of villagers to a location near the Knin-Drnis road, where one of the three men opened fire at them, killing seven, including three women. One person survived and managed to escape to a nearby forest.

Another person, an elderly woman, was killed in her house.

The SNV said it was not clear what prevented prosecutorial authorities to further investigate the crime and called on them to do so.