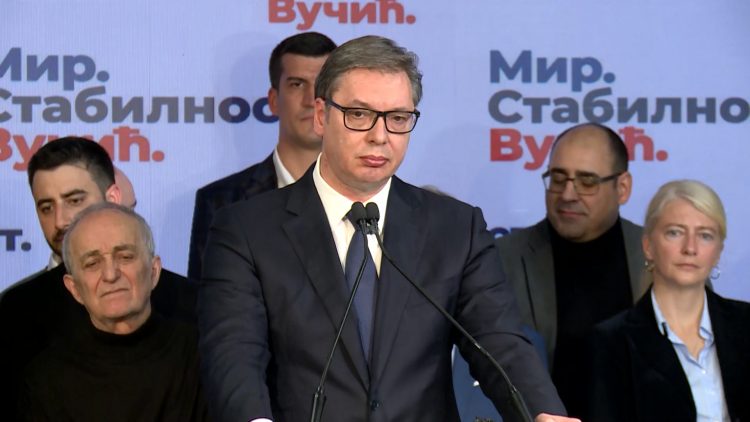 Serbian President Aleksandar Vucic declared victory in presidential elections on Sunday evening, announcing that his centre-right Serbian Progressive Party (SNS) would have a majority of seats in the parliament whose composition, according to first estimates, shows a strong shift to the right for Serbian society.

Eight presidential candidates and 19 lists of candidates ran in Sunday’s presidential and parliamentary elections in Serbia. Voters also went to the polls to elect local councils in Belgrade and 12 other cities and municipalities.

The coalition led by Vucic’s SNS party won 43.95 percent of votes, enough to secure 124 to 125 seats in the country’s 250-seat parliament and bring the party close to the possibility to form a government on its own.

In the Sunday polls, 59.9 percent or 2.25 million of around 3.84 million voters who went to the polls voted for Vucic. Serbia has some 6.5 million eligible voters.

“Elections have confirmed the democratic character of Serbian society,” Vucic said, admitting that they had also shown “a dramatic shift to the right” and “the huge impact of the Ukraine crisis on the election outcome.”

In the presidential race, Vucic faced off against seven other candidates, with retired General Zdravko Ponos of the united opposition coalition seen as his main contender. According to preliminary results, Ponos won about 11.3 percent of votes.

On Sunday evening, Ponos said this election signalled “the beginning of the end for Vucic.”

““We won’t wait four years for the next parliamentary elections… A mass of people flooded the polling stations, young people. We won in urban areas… everywhere where we had a better media situation,” he told reporters, adding that the coalition “will not gamble that away.”

According to unofficial election results, the coalition slate “Together for Vojvodina – Vojvodians”, headed by the leader of the Croat minorty DHSV party Tomislav Zigmanov, has won a seat in the Serbian parliament.

It ran together with the League of the Vojvodina Social Democrats of Nenad Canak and a number of prominent individuals and Croat associations in Vojvodina.

“I want us to have strong, better relations with Croatia and will do my best to make it happen, respecting all our differences,” Vucic said, adding he was “very pleased” that Zigmanov had won a parliamentary seat.

Ahead of the polls, the coalition slate was supported by the Croatian government, with the Croatian Foreign Ministry calling on the Croat ethnic community in Serbia to support it.