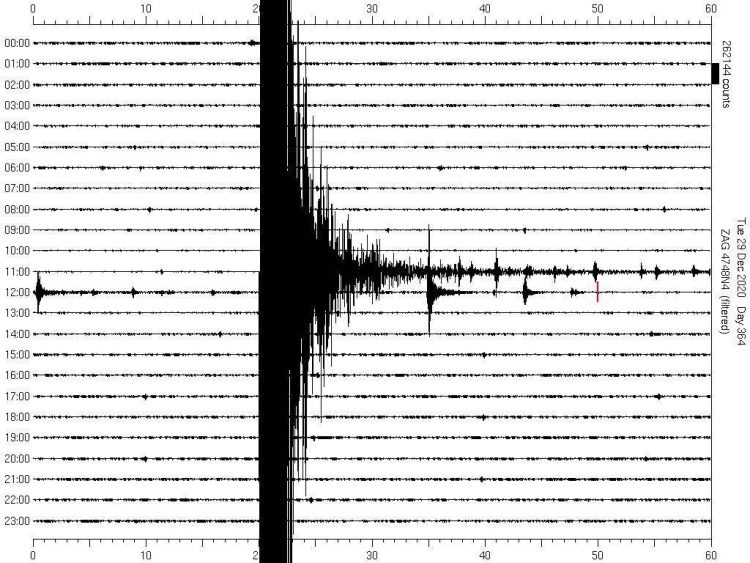 Two more strong earthquakes struck Croatia early on Wednesday morning in close succession. The first measuring 4.7 and the second 4.8 on the Richter scale hit at around 6 am with the epicentre reportedly in the Petrinja area in central Croatia, the site of a powerful 6.4 quake on Tuesday.

“The quakes will continue rattling (the area) for a long time. Tuesday’s earthquake was devastating and will certainly be followed by a long series of earthquakes, including, quite certainly, stronger ones,” head of Croatia’s seismological survey, Ines Ivancic, told state radio.

Ivancic added that weaker tremors like those on Wednesday would certainly affect the buildings in Petrinja and Sisak which had already been damaged damaged on Tuesday.

In that earthquake – one of the most powerful quakes on record in the area – seven people have been confirmed killed. It also caused massive damage to buildings in Petrinja, a historic town some 60 kilometers south of Zagreb. The quake was also strongly felt in the capital, as well as neighbouring countries, with Serbia, Slovenia, Bosnia, Austria, and the European Union all offering help and assistance.

Experts say the recent seismic activity is caused by a fault line in the area around Petrinja unrelated to the fault line north of capital Zagreb which had caused a massive earthquake in March, heavily damaging the city’s historic centre as the country was going into a coronavirus lockdown.

The new internal travel restrictions, introduced recently to combat a wintertime surge in coronavirus cases, have been suspended countrywide on Tuesday, to clear roads congested by people fleeing urban centres and also to ease access to the worst-hit area.

Meanwhile, search and rescue teams inspected some 50 villages around Petrinja during the night, rescuing six survivors.

Ivancic told state radio that Petrinja was struck by “an enormous quantity” of smaller quakes and tremors since Monday. The ground is shaking almost every minute, she said, including at least 25 to 30 tremors measuring 3 or above on the Richter scale.