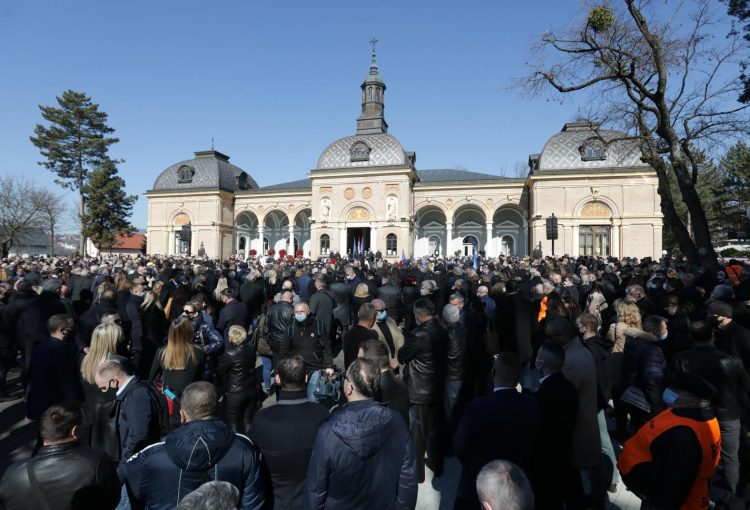 The Zagreb Municipal Misdemeanour Court has acquitted the Zagrebacki Holding utility conglomerate and the acting director of the municipal cemetery company, Roko Gruja, on Tuesday, of charges filed by the Civil Protection Directorate after more than 1,000 people - including many politicians - had showed up to attend the funeral of Zagreb mayor Milan Bandic in March.

The court’s spokesperson told state agency Hina on Tuesday that the verdict was delivered on 6 April and that it could be appealed, saying a judge found that the charges against the multi-utility conglomerate and Gruja did not constitute a misdemeanour.

The Civil Protection Directorate filed the charges in March, fining Zagrebacki Holding 20,000 kuna and Gruja 10,000 kuna, as well as announcing that they would press charges against the City, and the acting mayor and Bandic’s deputy, Jelena Pavicic-Vukicevic, for organising the funeral.

An inspection established that more than 1,000 people attended the funeral on 3 March and that the city was aware of committing a misdemeanor because, realising that many people would attend, it had hired 300 guards to supervise compliance with Covid measures.

Under a decision by the national Covid task force which was in effect at the time, a maximum 25 people could have attended any funeral in the country.

However, the city authorities decided to ignore the coronavirus restrictions. The longtime controversial mayor of Zagreb, Milan Bandic, had died abruptly in late February from a heart attack, only two months before the next local election in May 2021.

Among those present at Bandic’s funeral were Prime Minister, Andrej Plenkovic, and Parliament Speaker, Gordan Jandrokovic.